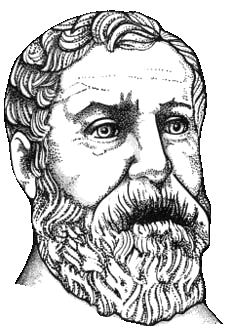 Greek mathematician and scientist Heron (also spelled Hero) of Alexandria, Egypt (10-70 AD) was a wonder. Here are my notes on some of the ancient marvels attributed to him. That a few of these things even existed did surprise me, and helped greatly when it came to building ancient worlds in my fiction writing.

(My asides are in italics.)

Automatic temple doors made people think they were witnessing a miracle from the gods. Altar to the left of the doors had hidden plumbing system and a fire underneath. The heat/steam and counterweights opened the doors. Compressed air = a trumpet-like sound. How cool is that? Automated moving figures made offerings to the gods when fires underneath them were lit—same principle as temple doors.

Holy water dispensers were the world’s first coin-operated slot machines. Worshiper’s coin fell on a lever inside and pushed it down, releasing a pre-measured amount of water into the person’s cup—another miracle! Money was the key to running a successful religion. No kidding! Smart tap—as a cup of water flowed out, replacement water flowed back into the dispenser from another hidden container.

Omen machine, the world’s first great con job—cogs, ropes, and pulleys inside a miniature model of the temple; worshiper asks the gods a question and turns the wheel on the side; little mechanical bird on the rooftop spins and either sings or stays silent, depending on the answer (a priest decides); singing occurs when a cup attached to a warbling whistle is lowered into the water inside. Yet another miracle, y’all. Watch while I holy-roll! Omen machines were in particular demand during wars. Speaking of… Automatic war machines—in particular, polibolos (Greek catapults). Multi-shooter; re-fired without rest using a chain and a crank; armor-piercing. This was the first Gatling gun.

Heron’s steam ball brought water, fire, and air together and produced rotary steam power. Fire stoked outside a deep bowl of water forced steam up through two pipes and into a hollow metal ball pierced by those pipes (suspended over the bowl). When in motion, that ball was the fastest rotating mechanism in the ancient world. With pistons, it would have become the first turbine steam engine.

—from Ancient Marvels: Heron of Alexandria, the History Channel