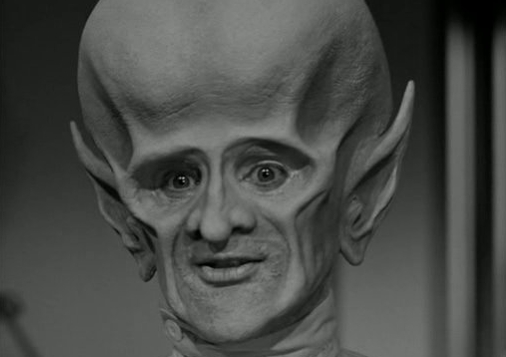 David McCallum’s poor, tragic character, disenchanted by the hopelessness of manually toiling day in and day out in the oppressive darkness of the town coal mine, takes on a job as the town scientist’s guinea pig. The project propels his human brain THOUSANDS of years into the future and evolves him from this…

And, finally, to this:

… where he’s not only grown a sixth finger but can absorb text at crazy speeds, read minds, spew out intelligence a normal brain could never hope to understand, and even physically repel anything that threatens him.

THAT BRILLIANT MOMENT OF FORESHADOW: Very early into the episode, David’s character has a “hopes and dreams” moment and tells his girlfriend, “If only I could find work where I could really use my brain. I’d show them.”

Of course, he was talking about a desk job. Haha.